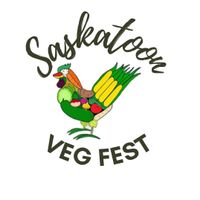 Saskatoon Veg Fest is a celebration of vegan living.

Dale Mac, Zulu Panda, and Andreea The Narrative
Live @ d'Lish by Tish Cafe (Saskatoon, SK)
May 11, 2018
$10 at the door
Music at 7:30
All ages Dale Mac Music - Dale McArthur is a Blues/Roots/Rock guitarist and songwriter from the White Bear First Nation and based in Regina, Sask. His style is in the vein of many Canadian artists and legends (Matt Mays, The Trews, Tragically Hip). His guitar writing influences include Pearl Jam, Clapton, and Springsteen. https://www.dalemac.com/ Zulu Panda is folksy charm and raw passion, delivered with an outstanding live presence. Hailing from Vancouver BC, this indie-rock singer-songwriter performed in every province and territory to commemorate the 150th anniversary of Canada in 2017. His music combines heartland rock with grunge while maintaining a pop sensibility. His dynamic sound is matched nicely with warm melodies and Dylanesque storytelling. He is a troubadour of sound, stage and beard. He will be touring Canada from April to August of 2018. http://www.wesleydavidscott.com/
http://zulupanda.bandcamp.com/ Andreea The Narrative - Her sound is a mix of the Coffeehouse sound and Canadian Indie Rock. Some common themes in her music is the contrast between life death, light and dark and finding one’s way in the post modern world while finding happiness. Repetition and cyclical themes is one of the ways that Andreea is consistent and congruent with here music. These themes present themselves in the EP release of “The Narrative”.  Andreea is looking ahead to the future release of "Haunted Former Lives", this is a rather ambitious EP that features vivid story telling, catchy yet well crafted lyrics and crisp clean 12 String tones. This release takes from the previous works and builds on that foundation. http://www.andreeathenarrative.com/